The global meeting place for all of Caribbean Aviation

News about this airline - please include a link to the source as well as the article text itself.
Web site: http://www.aircanada.com/
Post Reply
First unread post • 1 post • Page 1 of 1

Air Canada racked up about $1.18 billion US in revenue last year by charging for a variety of services including fees for ticket changes, upgrades, baggage, seat selection and food, according to a report from a U.S. market research firm. (Air Canada)

Global airlines are expected to earn a record $82 billion US this year by charging customers extra for everything from seat assignment to baggage fees to travel commissions.

And Air Canada is among the top ten airlines in the world when it comes to earning this so-called ancillary revenue, racking up nearly $1.18 billion US last year, according to reports from IdeaWorksCompany, a U.S. research company that tracks airline revenue.

IdeaWorksCompany reviewed 138 airlines and examined in detail 66 airlines that publicly disclose extra revenues in their financial filings, which Air Canada did for the first time.

Just over half of Air Canada's ancillary revenue was from charging for "a la carte" services, such as fees for ticket changes, upgrades, baggage, seat selection, sales of food and beverages, entertainment and wireless internet access, travel commissions and fees charged for purchases made with credit cards. The remaining 45 per cent was earned through the Aeroplan reward program.

Those extra charges amount to slightly more than 10 per cent of the airline's $11.38 billion US revenue for 2016.

Air Canada didn't respond to a request for comment on this story.

The total amount earned from these extra fees worldwide has jumped from $32.5 billion in 2010 to an estimated $82.2 billion for this year. 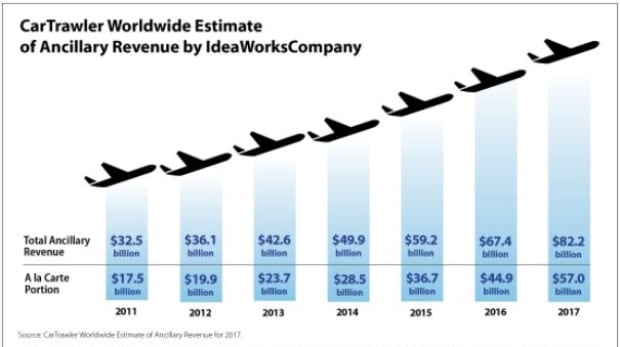 IdeaWorksCompany president Jay Sorensen, who also works as an airline industry consultant, says "with few exceptions," airlines all over the world are moving to a la carte methods to provide more choices for consumers and boost their bottom line.

"The economic boon of ancillary revenue has proven to be a highly useful tool to fix airline finances," he says in a report. "It delivers profit-boosting results during times of severe economic distress, and works effectively to lift profits."

Aviation consultant Robert Kokonis of Air Trav Inc. says major airlines are facing "an onslaught of ultra-low-cost" airlines and have no choice but to strip their flights of all frills in order to compete.

"I call it the new unaligned passenger that has got no loyalty to Air Canada's frequent flyer program or anybody else's, that's just shopping for the absolute lowest fare," he says. "And for the carriers to keep attracting that type of passenger, they have to unbundle their services."

Some of these services used to be buried in the price of the fare. But Kokonis says airlines have spent the past few years catching up on the concept of "merchandising" their flights.

"It's the Walmartization of air travel. People want it cheap and they want it now," he says. "Fine … here's your ultra-low-cost fare. But don't complain to me when you want to have a meal included, a bag included, a seat selection included, cancellation fees and changes any time you want. It's not going to happen." 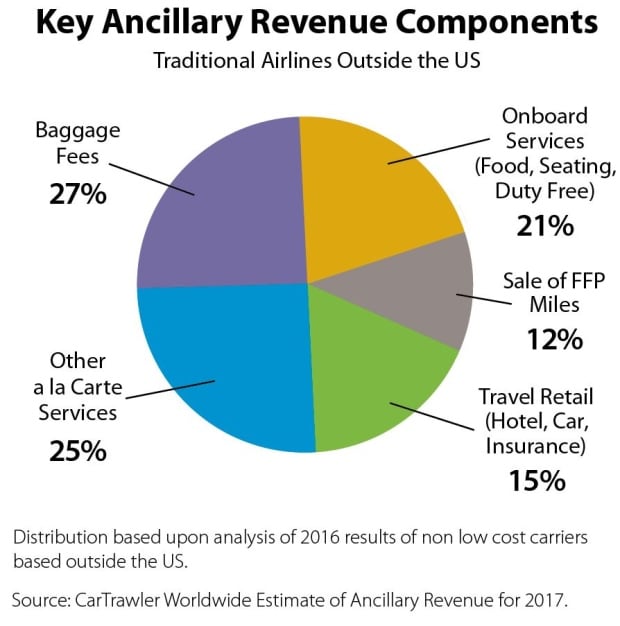 He says in many cases, an airline's ability to get an extra $5 or $10 per head can be the difference between losing and making money on a flight.

Extra fees are even greater cash generators for low-cost carriers like Spirit Airlines, Frontier and Allegiant in the U.S.

In the case of Spirit Airlines, nearly half of its 2016 earnings came from extra fees, according to IdeaWorksCompany. The airline charges for water ($3), food, boarding passes, assigned seats and luggage, and earns an average of $49.89 extra per passenger on top of the airfare.

Though these are a lucrative source of revenue, Sorensen says airlines need to be transparent when it comes to extra fees.

"It's got to be optional," he says. "It can't be done in an overly aggressive or obnoxious manner."

He compared the airlines' approach to filling a shopping cart at the grocery store.

"As you walk into the store, you buy the seat, and then you add stuff to that, if you want to," he says. "And when you check out, that's when you know the final price of what you put into the shopping cart for your travel."

Canada has two domestic low-cost carriers: Rouge, an arm of Air Canada; and Flair Airlines, formerly NewLeaf, a domestic carrier. Two new ultra-low-cost carriers are expected to launch next summer: Swoop, which is WestJet's entry in the market; and Canada JetLines, which plans to offer service from Hamilton and Waterloo, Ont.

"I think one of the big reasons WestJet is launching [Swoop]," Kokonis says, "was that they didn't want to lose their existing customer base to this new breed of ultra-low-cost carriers."
Top
Post Reply
1 post • Page 1 of 1